Toprak Razgatlioglu and Jonathan Rea promise thrills at the Circuit

The rivalry between the top Superbike riders was evident during the first day of free practices of the Hyundai N Catalunya WorldSBK Round.

The second edition of the Hyundai N Catalunya WorldSBK Round started today in the best possible way: with the two protagonists of the World Championship showing off their talent and their rivalry, as the pace of both riders was very close. Although they only faced two free practice sessions, the facts point to a breath-taking day for spectators tomorrow.

Despite the evenly matched session, Toprak Razgatlioglu scored the first goal with the fastest time of the day, which he set late in the session. The Pata Yamaha with Brixx WorldSBK rider clocked 1:42:369, compared to Jonathan Rea’s 1:42:419 this morning. The Kawasaki Racing Team WorldSBK rider used this time to take the lead in the FP1 time sheet, with Razgatlioglu second.

However, in the afternoon Jonathan Rea had to settle for fourth position. Michael Ruben Rinaldi (Aruba.it Racing – Ducati), who was second in the same session, closed the first day of the Hyundai N Catalunya WorldSBK Round with the third fastest time (1:42:586).

Tom Sykes (BMW Motorrad WorldSBK Team) and Andrea Locatelli (Pata Yamaha with Brixx WorldSBK) duelled for fourth place, with Sykes finally taking the top spot, although with a difference of seven thousandths of a second off the Italian’s time. Locatelli, therefore, rounded off the top five with his 1:42:615.

One of the riders with the most points, Scott Redding – in second position in the World Championship – had a somewhat discreet performance today. The Ducati rider failed to make it into the top ten this morning, but in the afternoon session he was able to make up for it with sixth place.

On the other hand, Álvaro Bautista (Team HRC) has a personal best time of 1:43:092, which was good enough for ninth place this afternoon. Bautista was 14th in FP1. As the Spaniard said yesterday, the motivation to race at home is there, so the home crowd will surely give him extra motivation tomorrow.

In FP1, Philipp Oettl (Kawasaki Puccetti Racing), Randy Krummenacher (EAB Racing Team), Raffaele De Rosa (Orelac Racing VerdNatura) and Manuel Gonzalez (Yamaha ParkinGO Team) took the top four positions – in that order – with almost identical times. From Oettel (1:45:898) to Gonzalez (1:45.995), less than a tenth of a second difference. In the afternoon, these times were improved by practically the same protagonists. Raffaele De Rosa finished with the fastest time of the day (1:45:620), followed by Randy Krummenacher (1:45:687), Manuel Gonzalez (1:45:729) and Steven Odendaal (1:45:781).

Manuel Gonzalez was the best placed Spaniard on this first day, and was even able to lead the afternoon standings for much of the session. The Yamaha rider is fifth in the points standings, so he will be in the fight for the top positions if everything evolves in the same direction as today. Continuing with the home representation, Unai Orradre has shown a good pace on the Catalan tarmac. The Yamaha MS Racing rider took 13th and 14th positions in today’s free practice sessions.

Dominique Aegerter, the championship leader, was unable to attend the event as he is also competing in the MotoE championship. Even so, his points advantage is significant and, for the moment, no rival can take the lead from him.

The Turkish Bablion Yamaha Motoxracing rider was the clear leader of the day. Sofuoglu monopolised the top spot in both the morning and afternoon sessions, showing his intention to make that result a reality tomorrow. The best time in the class today was 1:55:815 set by the Yamaha rider in FP1. In a similar situation is Victor Steeman (Freudenberg KTM WorldSSP Team), Sofuoglu’s immediate rival, also in double figures. Although in the morning he was just one tenth of a second behind the championship leader, in the afternoon the gap between them widened to almost four tenths of a second.

In third place in terms of best times was Tom Booth-Amos (Fusport – Rt Motorsports by SKM – Kawasaki), with his 1:56:205. In the afternoon, however, the Englishman lapped in the last positions. Among the home riders, Daniel Mogeda and Alejandro Carrión were third and fourth respectively in the afternoon session, while in the morning session Álvaro Diaz (Arco-Motor University Team), who is participating as a Wild Card, and Íñigo Iglesias (SMW Racing) shone. Championship leader Adrián Huertas (MTM Kawasaki) was 13th and eighth in the sessions. Ana Carrasco, who suffered a crash this morning with no serious consequences for herself, but her bike had to be repaired, was 11th this afternoon.

The Yamaha bLU cRU Cup was the only competition in the meeting that has already held an official timed session. The result was pole position for Juan Antonio Conesa with his time of 2:00:293. The Gasss Racing Team rider was also the fastest in the morning free practice session. Englishman Fenton Harrison (FHS Racing) was second, followed by Iker García (ARCO MotoR University Team). Tomorrow, the single-make cup will have its two races, the first one at 11:45 am and the last one at 4:30 pm.

The Circuit, certified in the ISO 14001 and ISO 20121 standards for this competition and the Biosphere Commitment, promotes different actions in the field of sustainability. For instance, Km0 gastronomy to avoid CO2 emissions from transport and favour the local economy; the efficient use of energy and water; the donation of surplus food to a local social diner; the circular economy with tyres, and the recovery of selectively collected waste fractions, among others.

Spectators will be able to access the Circuit through Gate 1 from 8.30 a.m. and park their vehicles in car park A both on Saturday and Sunday. The grandstands from which all the action can be followed are C, G and B. 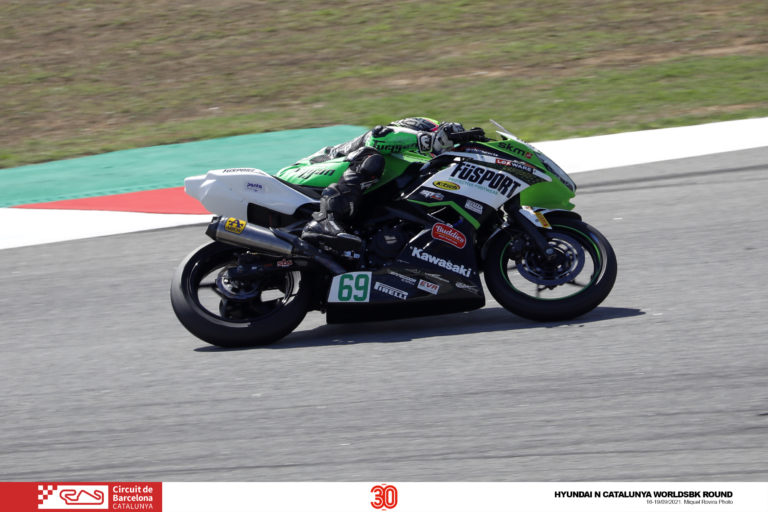 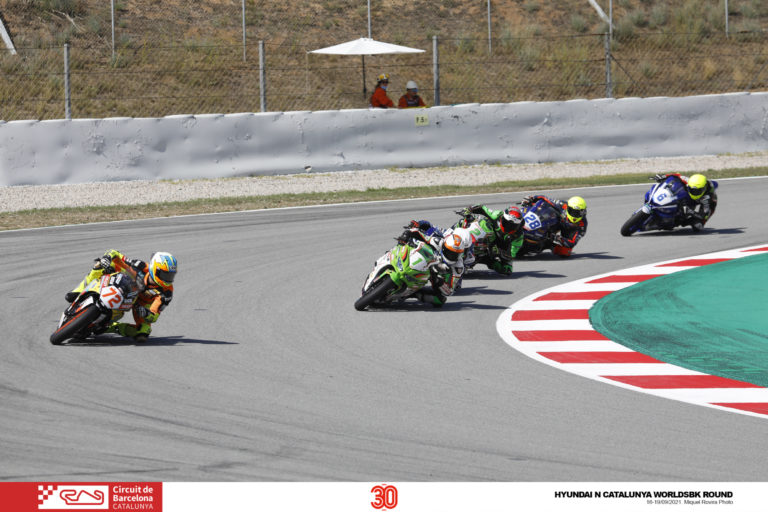 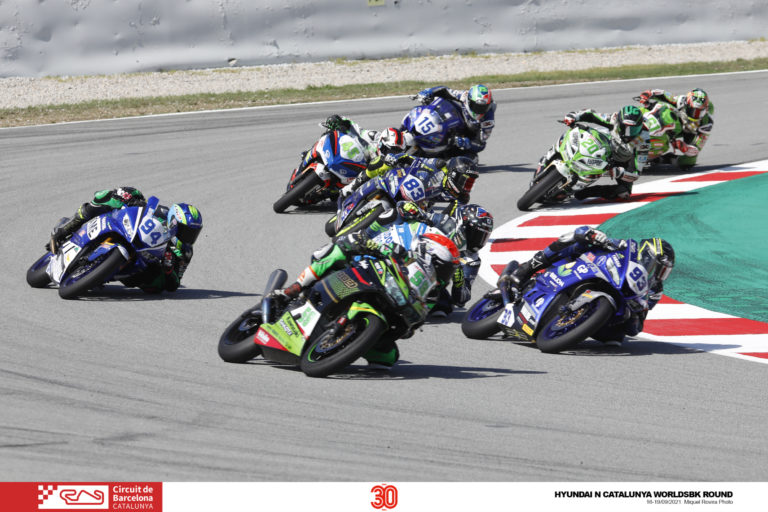 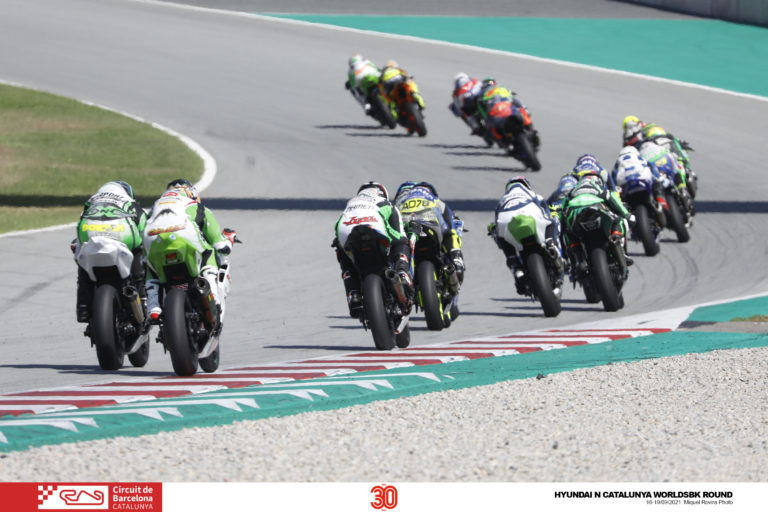 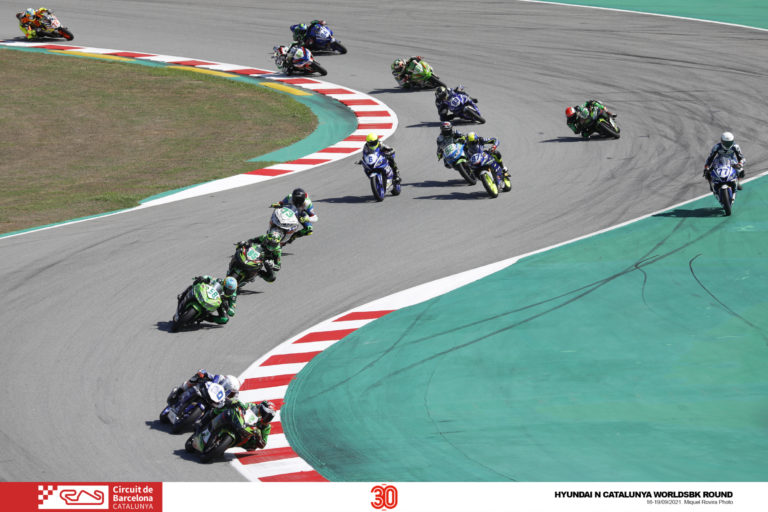 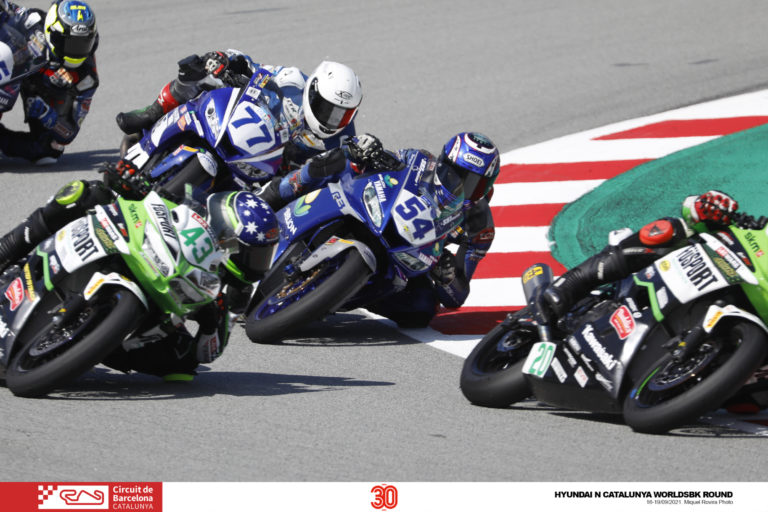 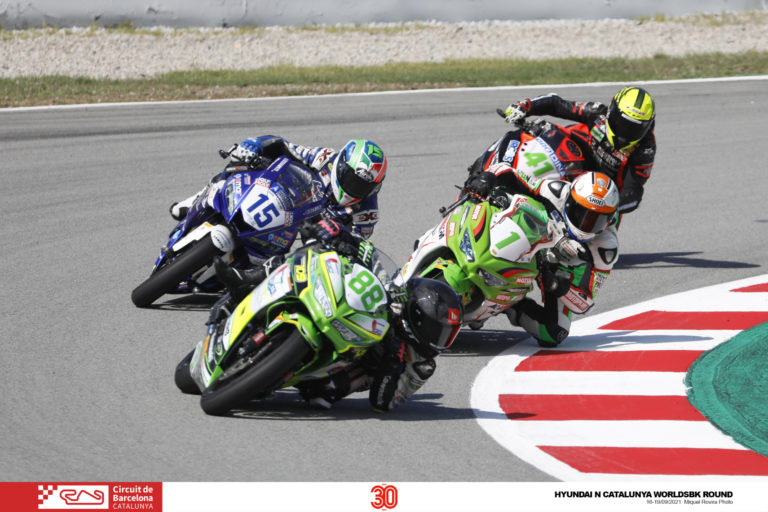 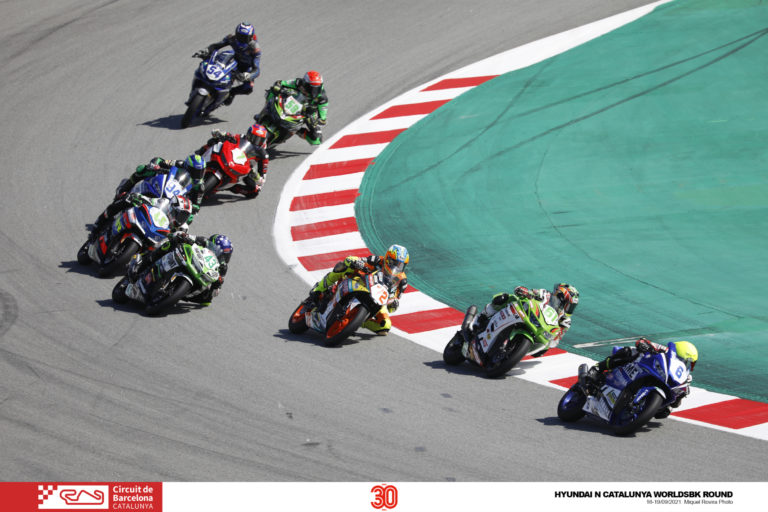 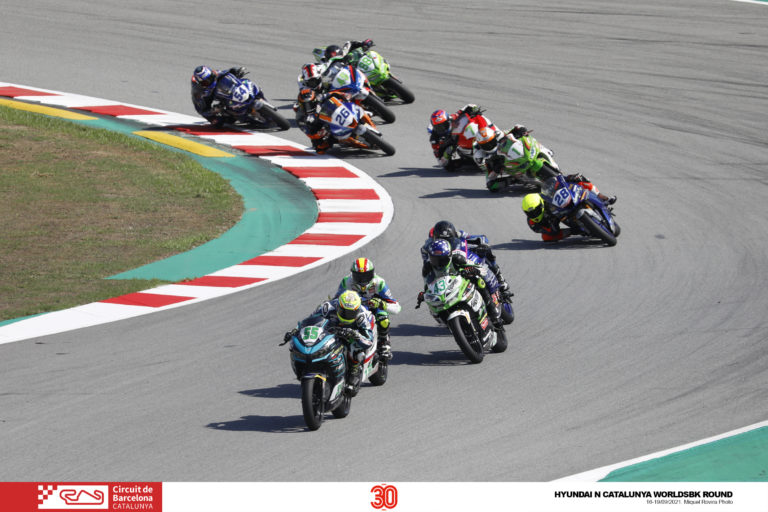 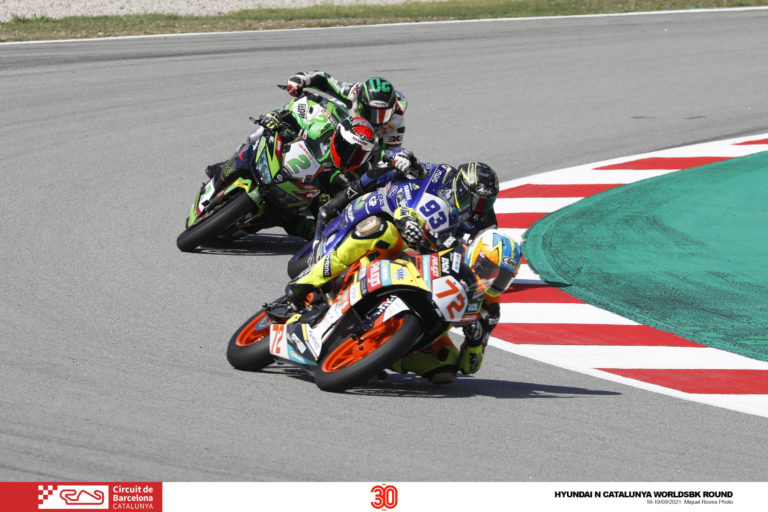 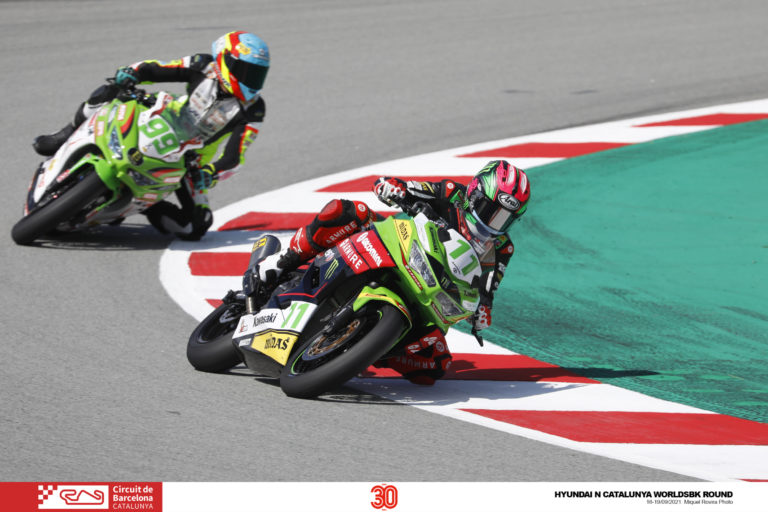 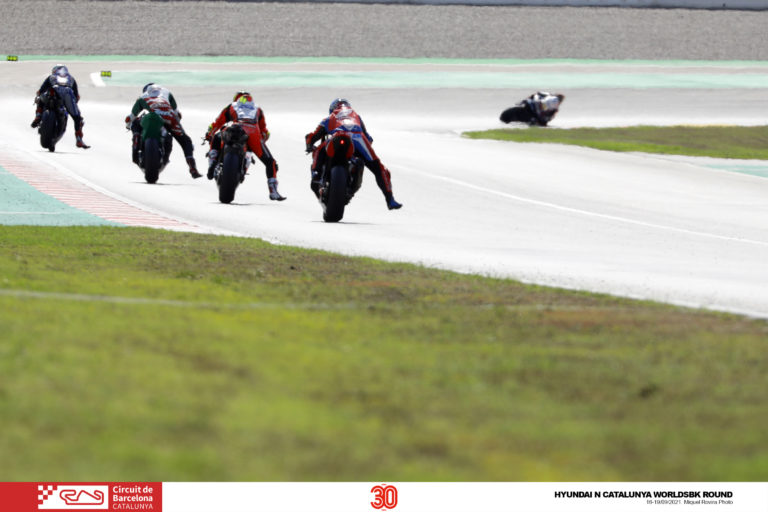 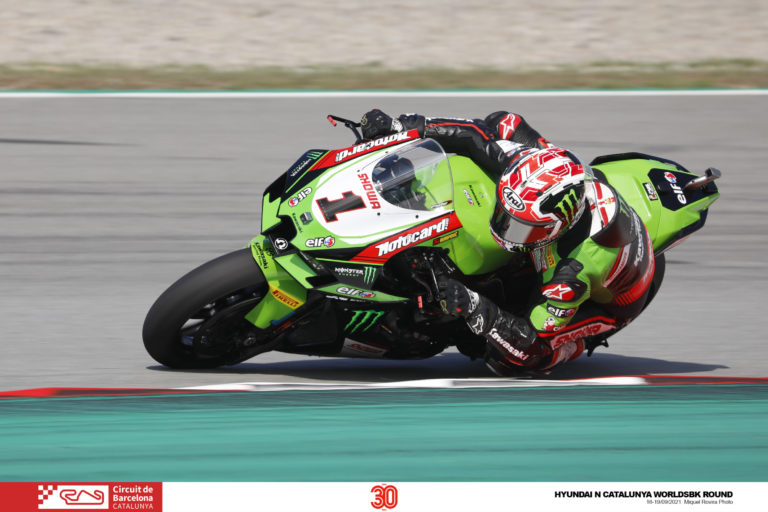 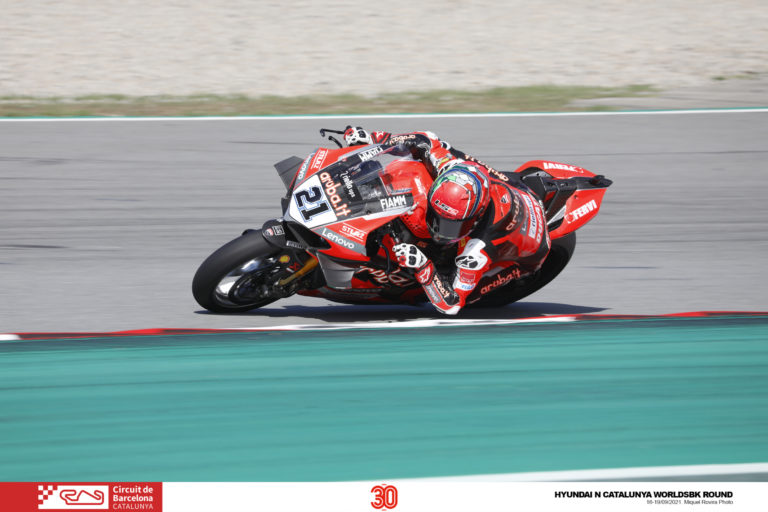 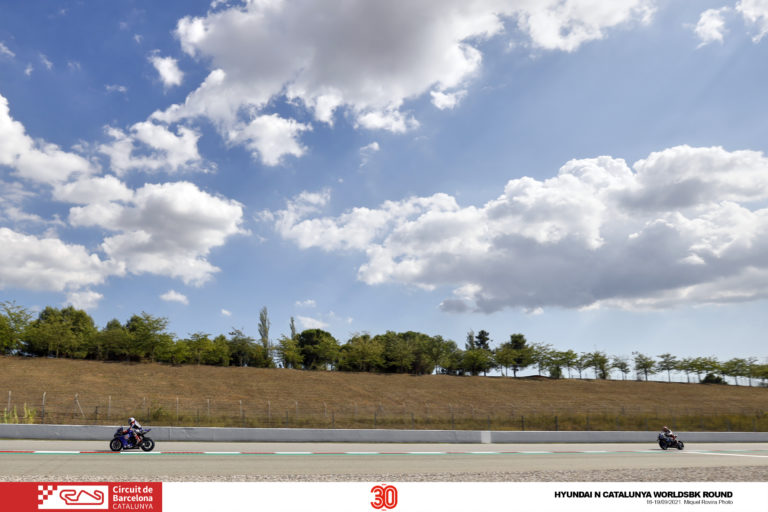 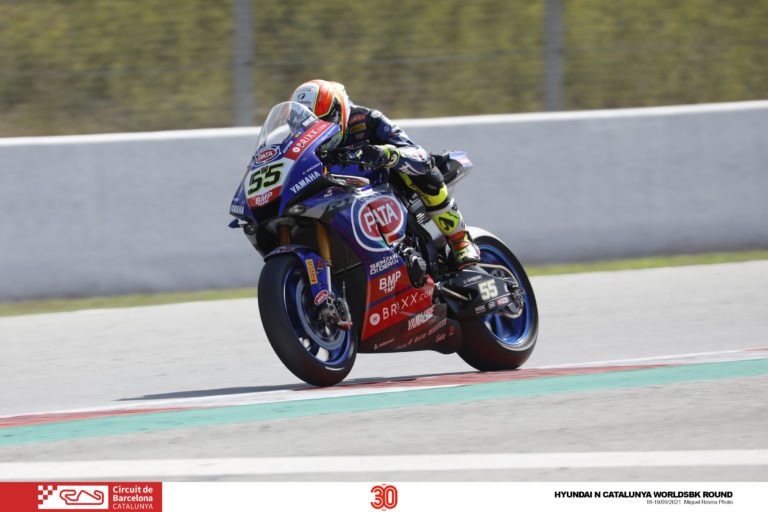 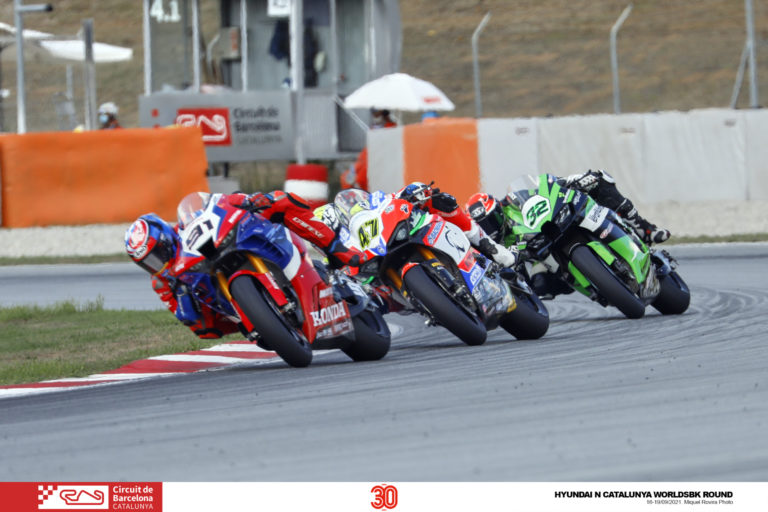 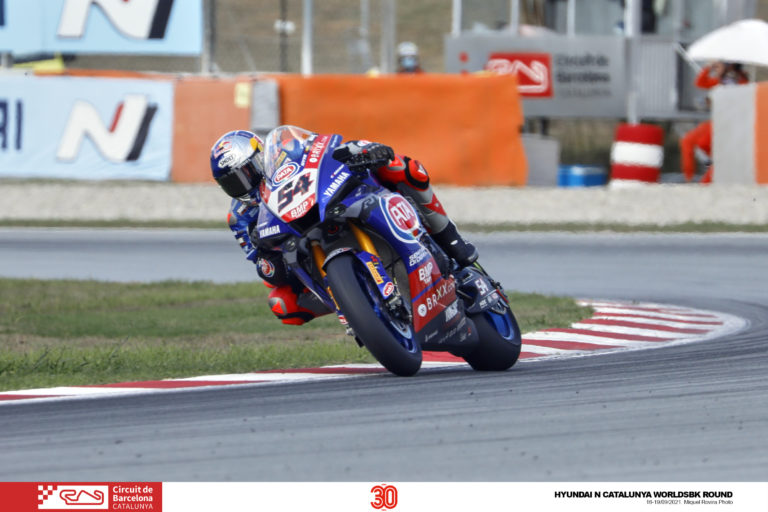 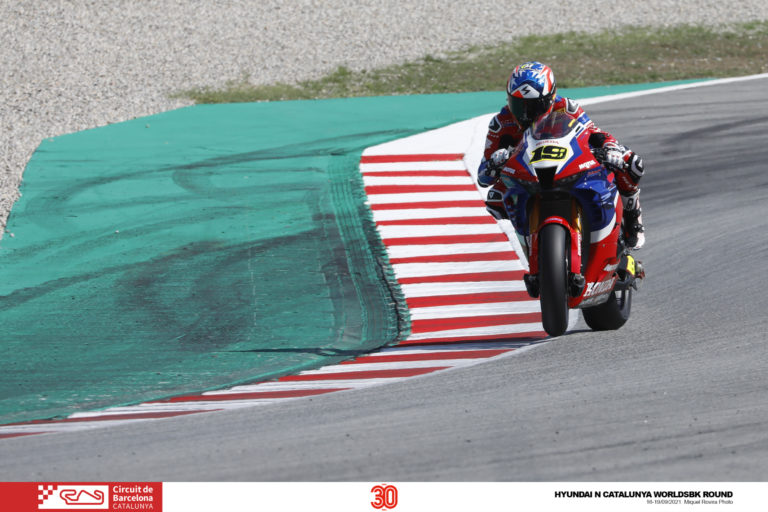 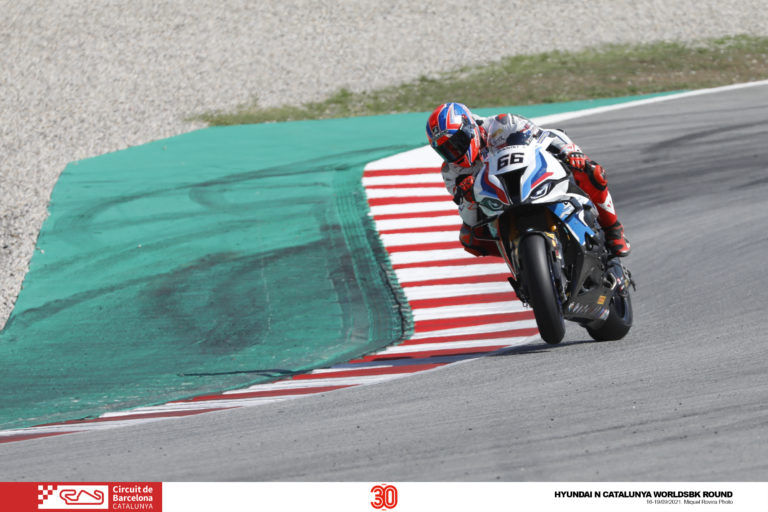 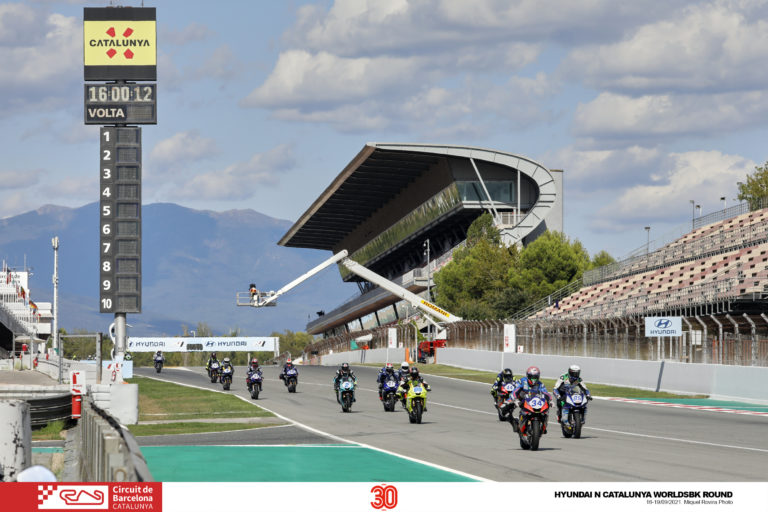 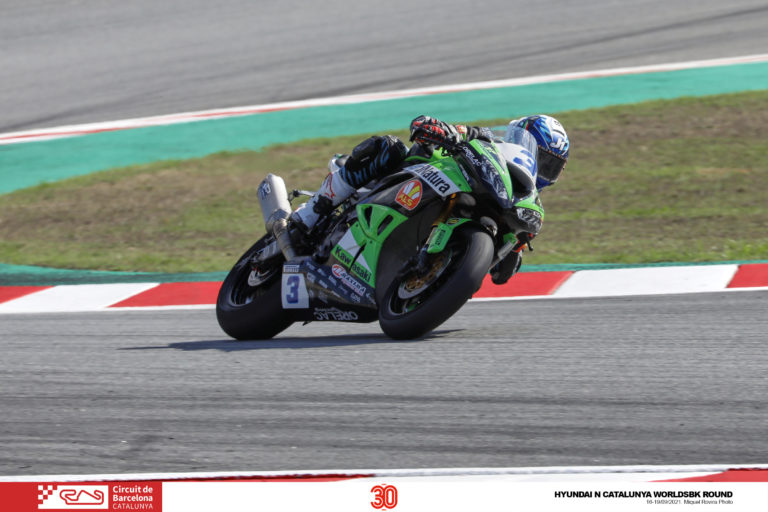 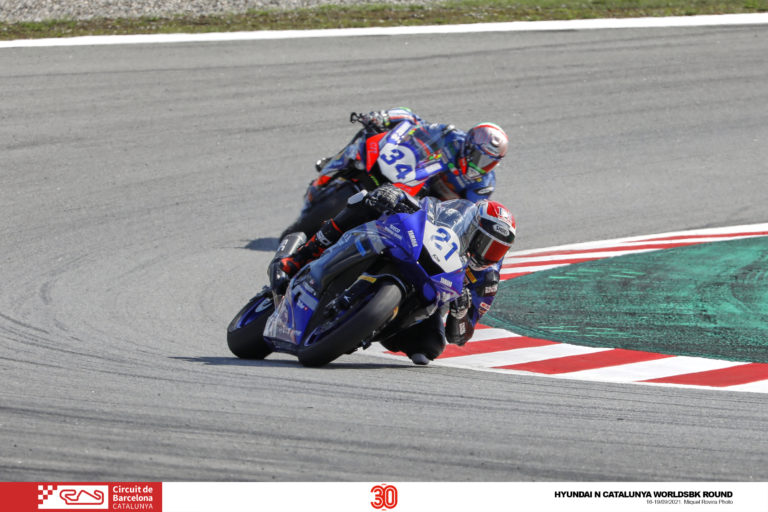 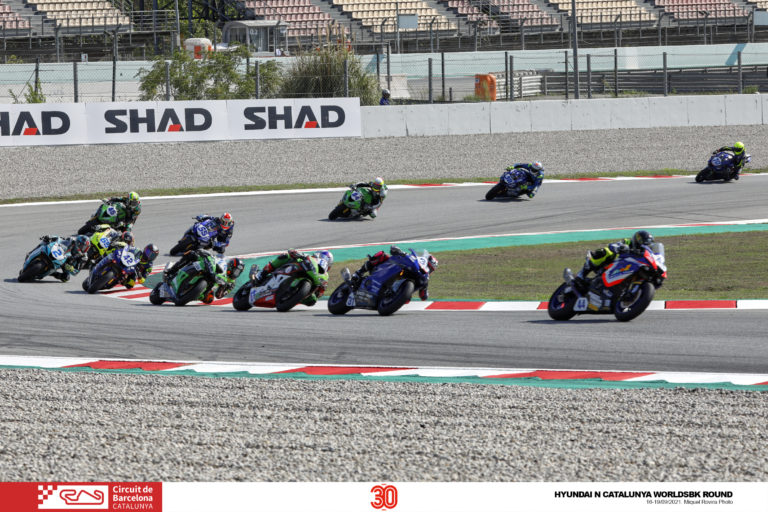 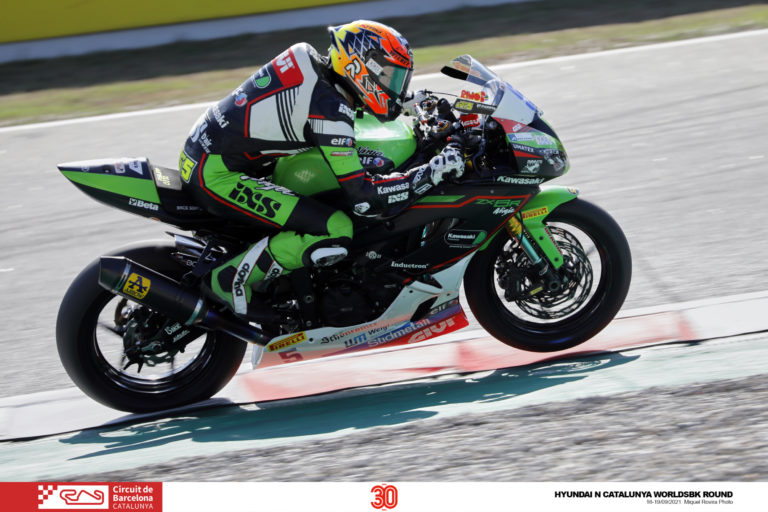 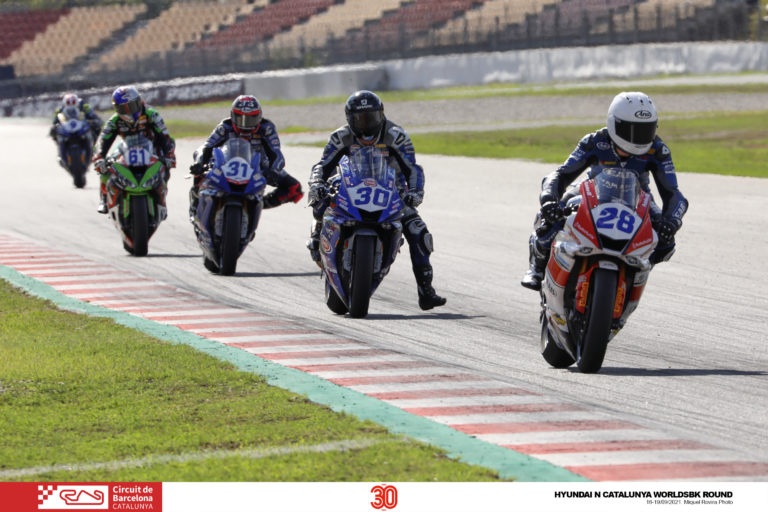 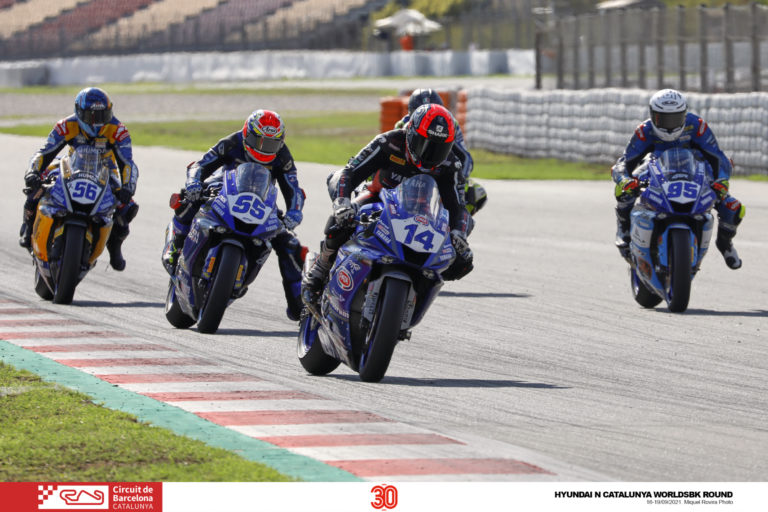 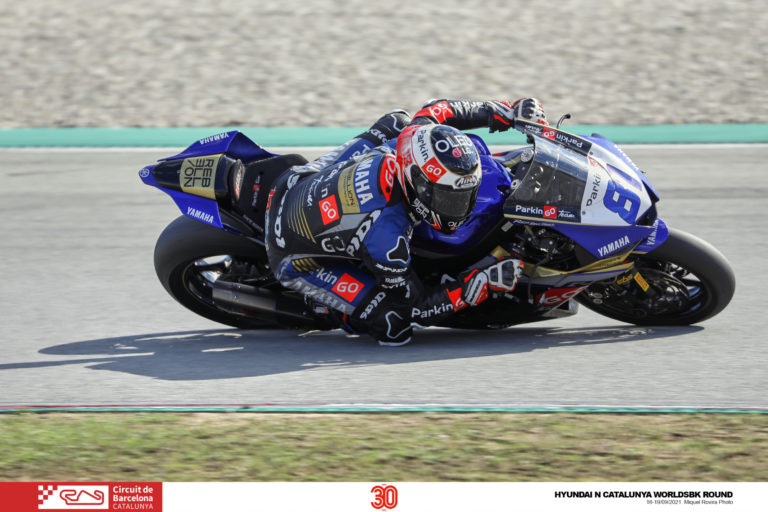 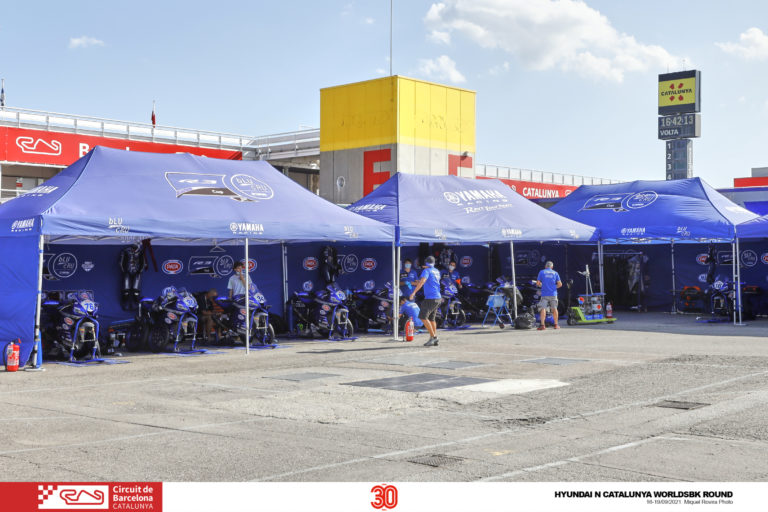